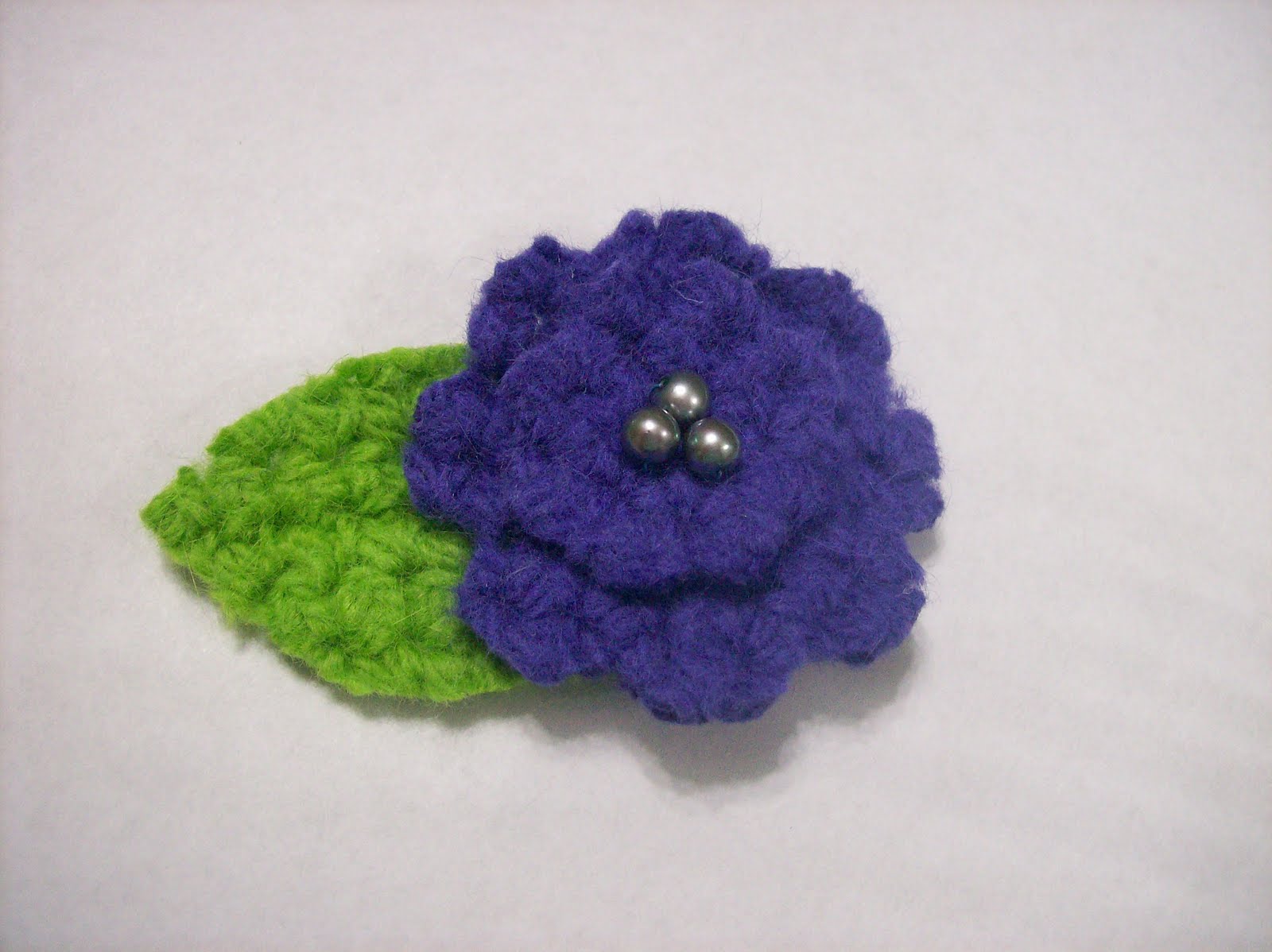 This was finished a couple of weeks ago.  It is part 2 of the b’day gift I made for my wonderful mom.  This was my first felted project.  It is made in Cascade Cloud 9, which is an Angora/Wool blend that I believe is 50/50 or close to it.  I made a couple of swatches, felted them, and then cut out the shapes and sewed them together along with these 3 pale blue beads and a safety pin on the back.  I thought it turned out beautifully! 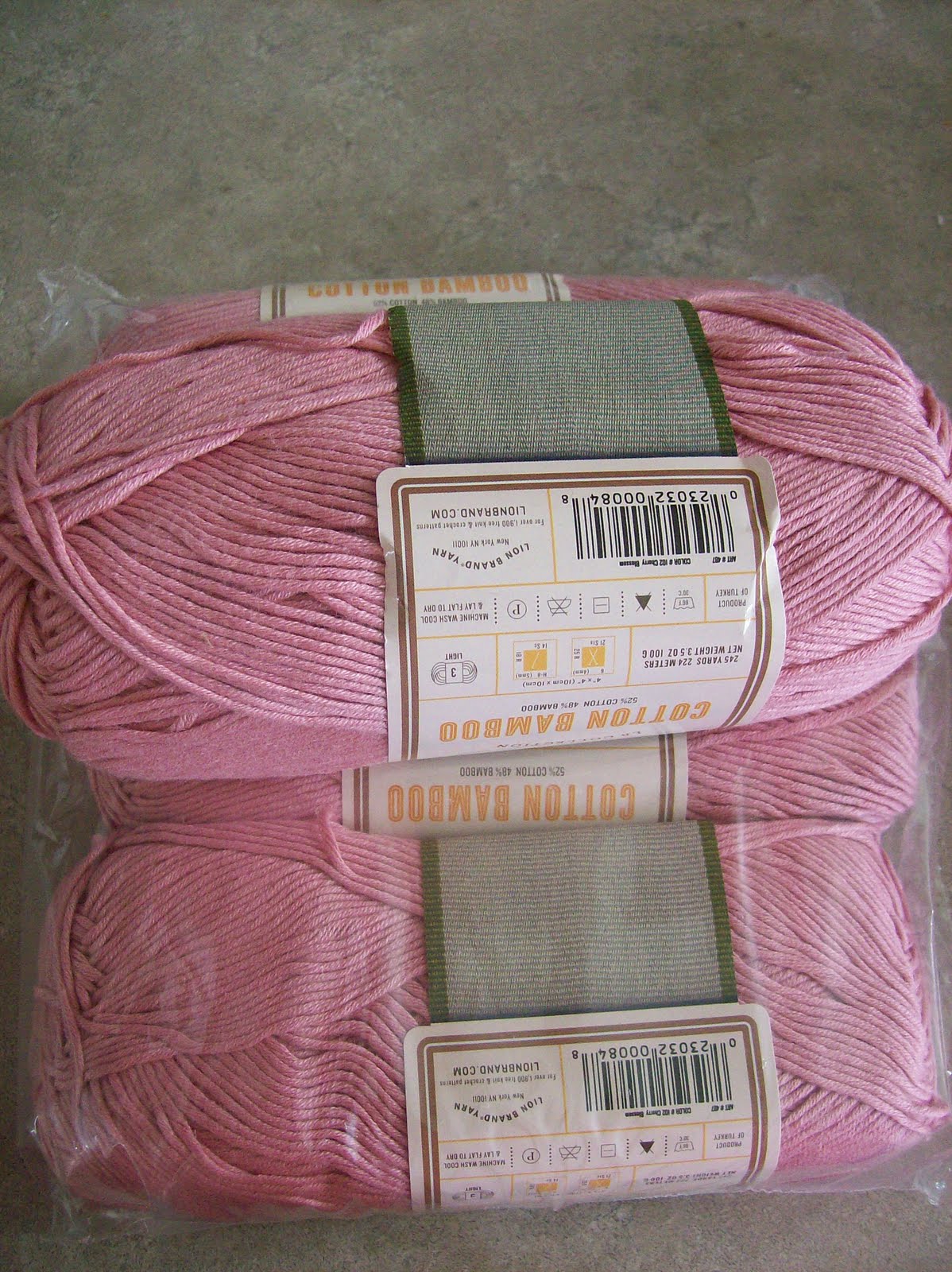 This is the Lionbrand Cotton Bamboo in Cherry Blossom that I ordered so that I could make a Bella Dress for my own baby to keep.  In a year when I am able to sell the pattern myself, this yarn will be for making the model that I will take pictures of for that version of the pattern, which will not be written with precisely the same wording, but with the same result. 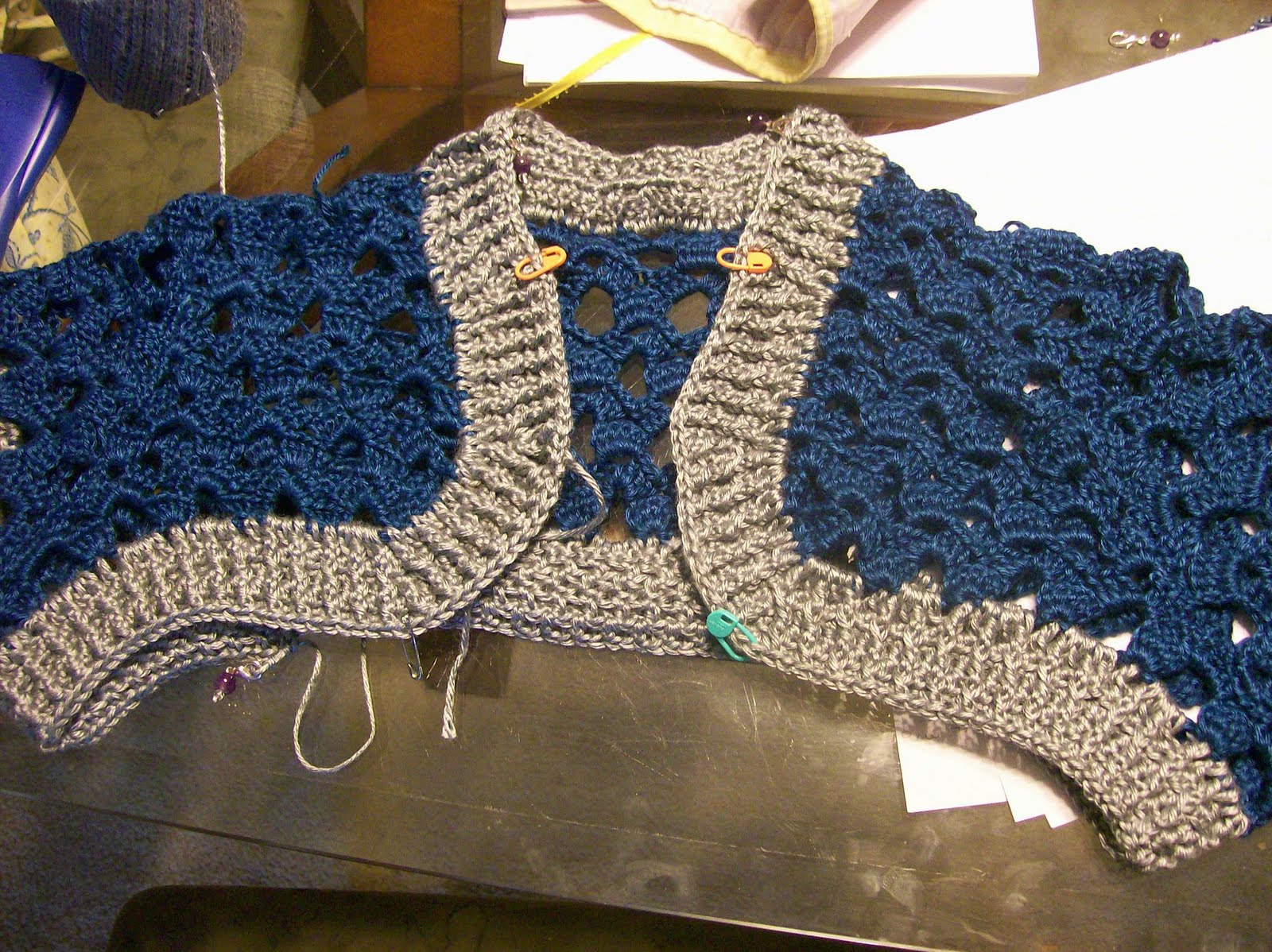 Well, this beauty, is the project that I have been pouring myself into for the past couple of weeks.  It is a bolero with a lacy stitch pattern and a ribbed edging.  This one is made in Paton’s Bamboo Silk, which is ridiculously soft and a little shiny.  I have finished this one now, and am making one in a different yarn that will be the model for the pattern that I hope to have for sale within a couple of weeks.  Working on that pattern is what prompted the post a couple back about symbol charts.  And speaking of which, the next picture is one taken of symbol charts I drew out by hand of the pieces so that I could figure out the size changes, or “pattern-grading” as I have seen it written.  I drew them out in pencil and then sprayed them with hairspray to keep the pencil from smudging.  They are hanging on my  door in this picture to dry.  I am really pleased with how this pattern is turning out.  I am really proud of it.  When it is ready, it will be for sale on ravelry and etsy, though slightly cheaper on ravelry because it costs me less to sell there.  Ane will also be for sale at my LYS (see below). 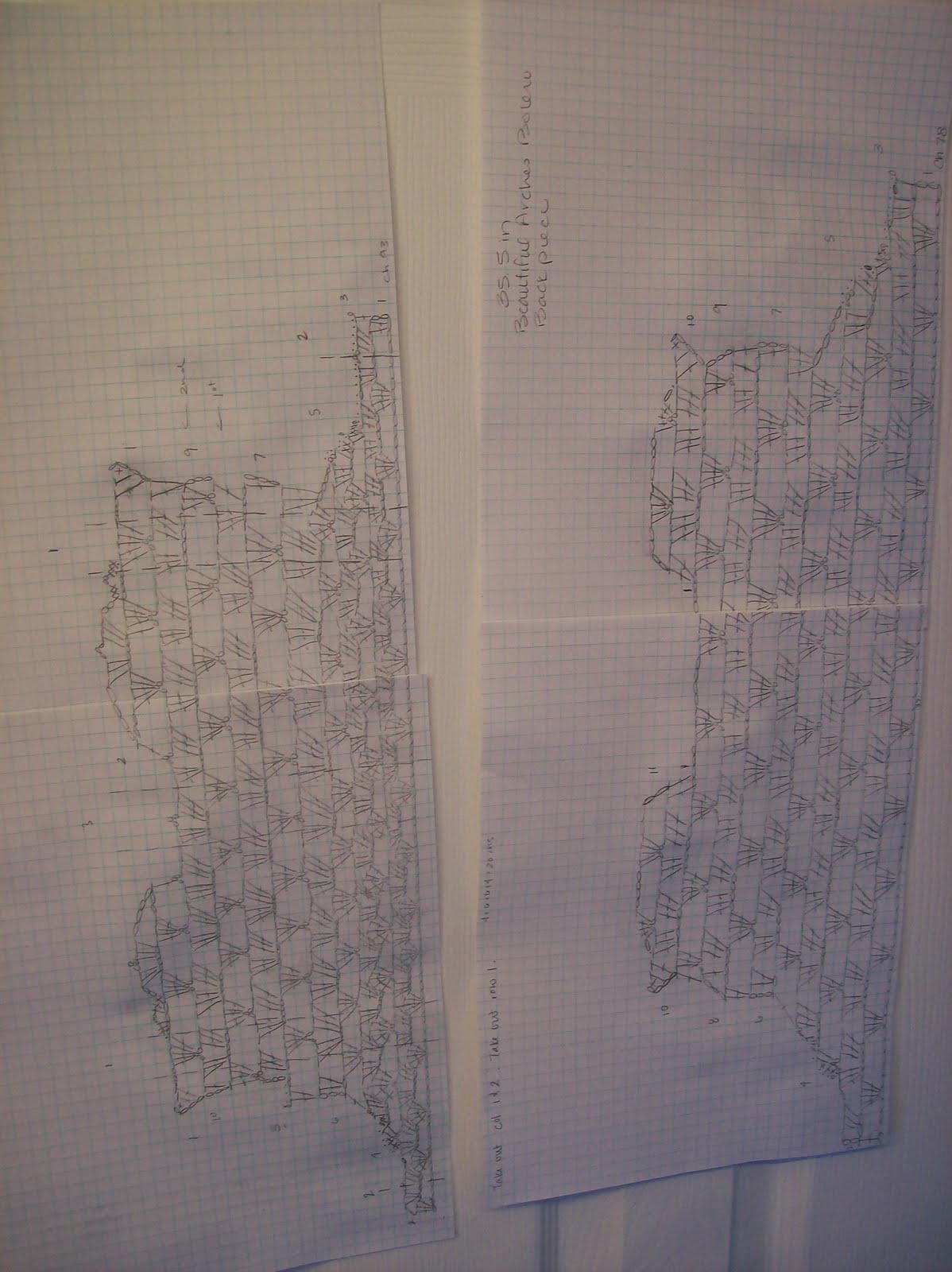 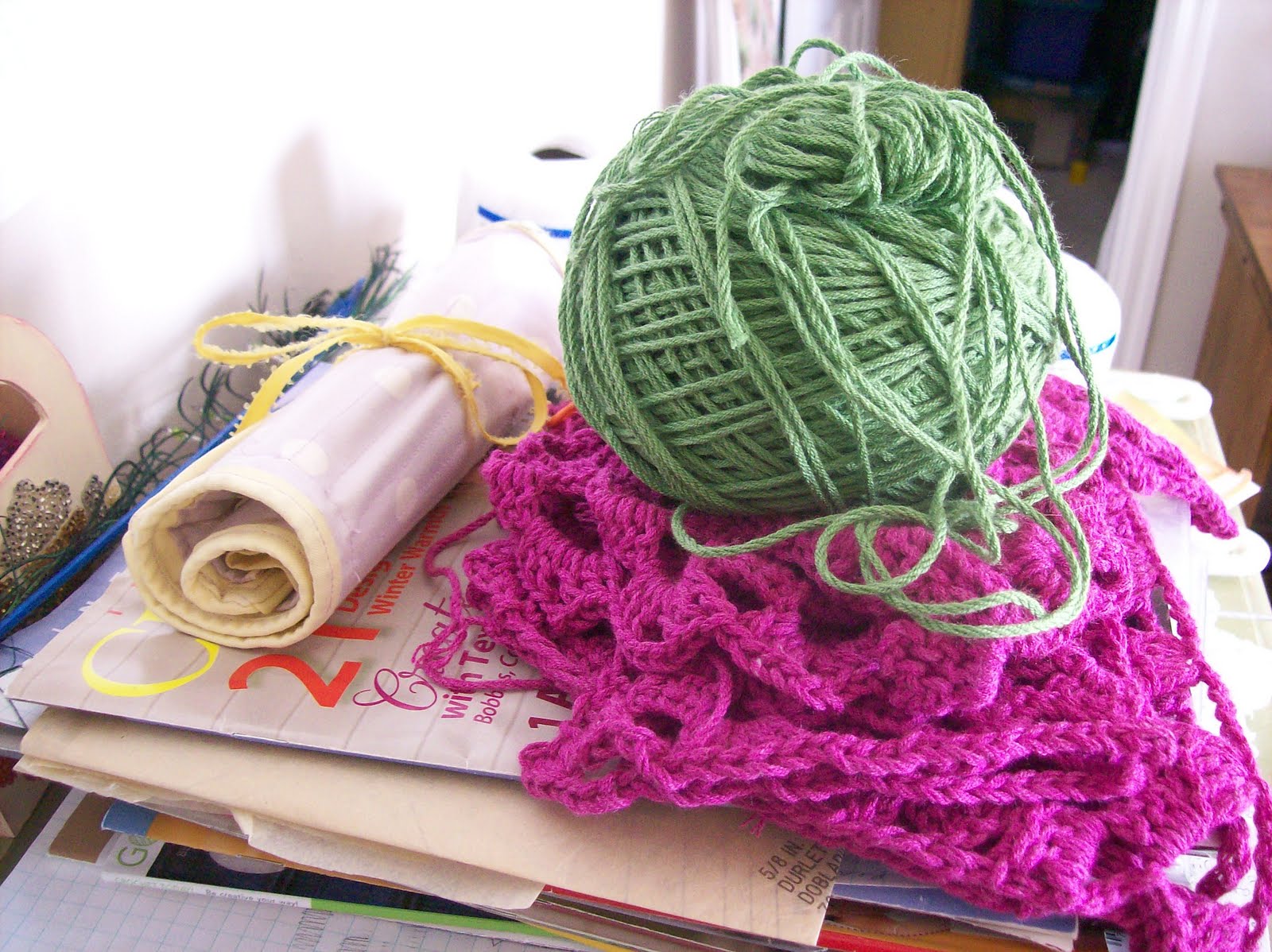 This picture shows the colors of the bolero that will be used as the model for the finished pattern.  My beautiful friend Whitney has agreed to model it for me when it’s finished so that I can get some great pictures of it.  This yarn is Berroco Weekend, which is a cotton/acrylic blend, in magenta and grass green.  This yarn was graciously provided by the owner of The Gourmet Yarn Company in Oklahoma City.  Thanks Margaret!  The pattern will also be for sale there when it is finished. 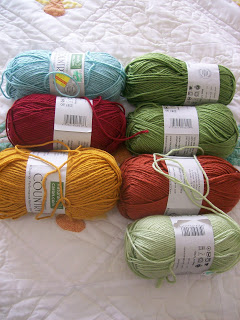 Okay, well, I can’t seem to figure out what is up with the formatting on this post, it irritates me to no end.  Anyway, this last picture is the yarn that I have purchased for a project that is due at the beginning of August.  It will be a little while before you see a picture of it here, but it will be awesome!
Just a little while ago I read two great posts on Doris Chan’s blog that were somewhat encouraging to me, and somewhat discouraging.  It helped me feel better because I know that even very experienced, awesome designers struggle with pattern-grading, just like me.  However, it is discouraging to think that it won’t get much easier.  You can be certain that I will be working as hard as possible this week on getting the bolero pattern finished and ready to sell.  As soon as that is finished I should be working on my next magazine project, and then on to my next self-publishing project.  I’ve got several in line waiting for me to get to them.  I doubt I’ll ever have enough time to get to all of the ideas that I have.  I’ll keep coming up with new ones faster than I can make them.  Oh well!  I wouldn’t want to be without a crochet project.
Have a cheery day everyone!
April

3 thoughts on “What have I been up to? Crocheting and pattern-writing furiously!”