Okay, so you’ve read the title of this post, and you’re probably thinking, as you look at this picture, that is not crochet! You would be right. This is not a crochet project. I am knitting a lace shawl. Maybe you know, and maybe you don’t, that knitting lace is a tad complicated. All those yarn-overs and decreases and increases and such have to go in the right places to make the pattern look right. If you make a mistake, which is highly possible, since the pattern repeat is quite long, undoing it is a little like a nightmare, especially if you are someone who learned to love crochet first…like me.

No, you can’t just grab the end and rip, unless you want all those stitches off your needles. Then there’s a big question whether or not you can get them all back on without losing any. You can un-knit it by working in reverse. This is probably the safest way to get back to your mistake because then you are only undoing one stitch at a time, without taking it off your needles. However, this makes for a very time-consuming ripping process. There is the option of putting in a “life line” and then grabbing the end and ripping back, but, anyway…

Last weekend I went to my LYS with my 2 older sisters. I totally blame them for my woes, because that’s what older sisters are for, right? Right. I was trying to knit a RS row of this shawl while they were sitting across from me asking me for tape measures and being distracting amusing. It was during this situation that the mistakes you see below occurred. I even began to say to them “How is anyone supposed to knit lace with you two around?!” However, I totally messed it up by switching first sounds of words. Do you ever do that? I do on occasion, and of course, it’s always funny. I said, “How is anyone supposed to lit knace…” and then it all dissolved into laughter and them trying to figure out what on earth I was saying. 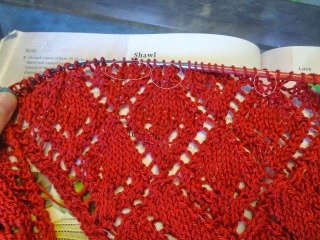 I finished a RS row during this episode at the yarn store. The next time I got towards the end of a RS row I discovered my mistakes, circled in the pic above (you may have to click on it to see it well enough). I realized how severe it was — 3 pattern repeats of every stitch and yarn over being one place to the right of where it should have been. I posted to Facebook and Twitter about my horrible mistake and said that I needed to put it down for awhile and cry. I was, after all, only 13 rows from the end. Not only was I sad to be so close to finishing and hit a major bump, but being close to the end of this top down triangular shawl means that there are LOTS of stitches in each row now…somewhere around 400 of them. Now, I did not really cry, but I did put it down and ignore it for at least 24 hours. And I was upset.

A few of my good friends (who I converse with on Facebook), who have significantly more knitting awesomeness than myself, convinced me that I did not need rip back to the mistake to fix it. I had also come down with a cold somewhere in there, so trying to figure out complicated knitting maneuvers was even more challenging than usual at that point. My great friend Caren explained the whole thing to me, how to take the offending stitch off my needle, let the stitches undo themselves down to the mistake, then use a crochet hook to fix the stitches and then work them back up to the working row. (See, crochet hooks. Little super heroes, those things. I mean, seriously! Haven’t you found a thousand great uses for them? I’ve even used them to tackle some of those complicated hairstyles you can find on blogs and youtube channels when I didn’t have the official hair doo-dad they recommend. But, I digress…)

When I first read my friend’s explanation, I was like, Wha… My sickness-fogged brain was totally clueless. So, I did the only reasonable thing a sick and confused yarn crafter can do. I went to sleep. Fortunately, my brain managed to work out what she was talking about during the time just before and after sleeping.

Renewed, I returned to my shawl and figured it out, one stitch at a time. It was complicated and slightly terrifying. Each time a finished a pattern repeat I took a break. Finally, it was finished! I fixed it, and then I could finish the row I had been on when I noticed the problem. Yay for increased knitting awesomeness! Yay for my friends with mad knitting skillz!

I finished this beautiful shawl! See the final photo here.

Until next time, may crochet save the day for you too!

Knit this beautiful cowl with a lace panel!

You’ll love this easy method of joining in a new skein!

1 thought on “When Knitting Lace, Crochet Hooks are Your Friends”

As an Amazon Associate I earn from qualifying purchases. I also earn from links to Lion Brand and Annie’s. There is no additional cost to you. Thank you for your purchase!

In My Ravelry Store