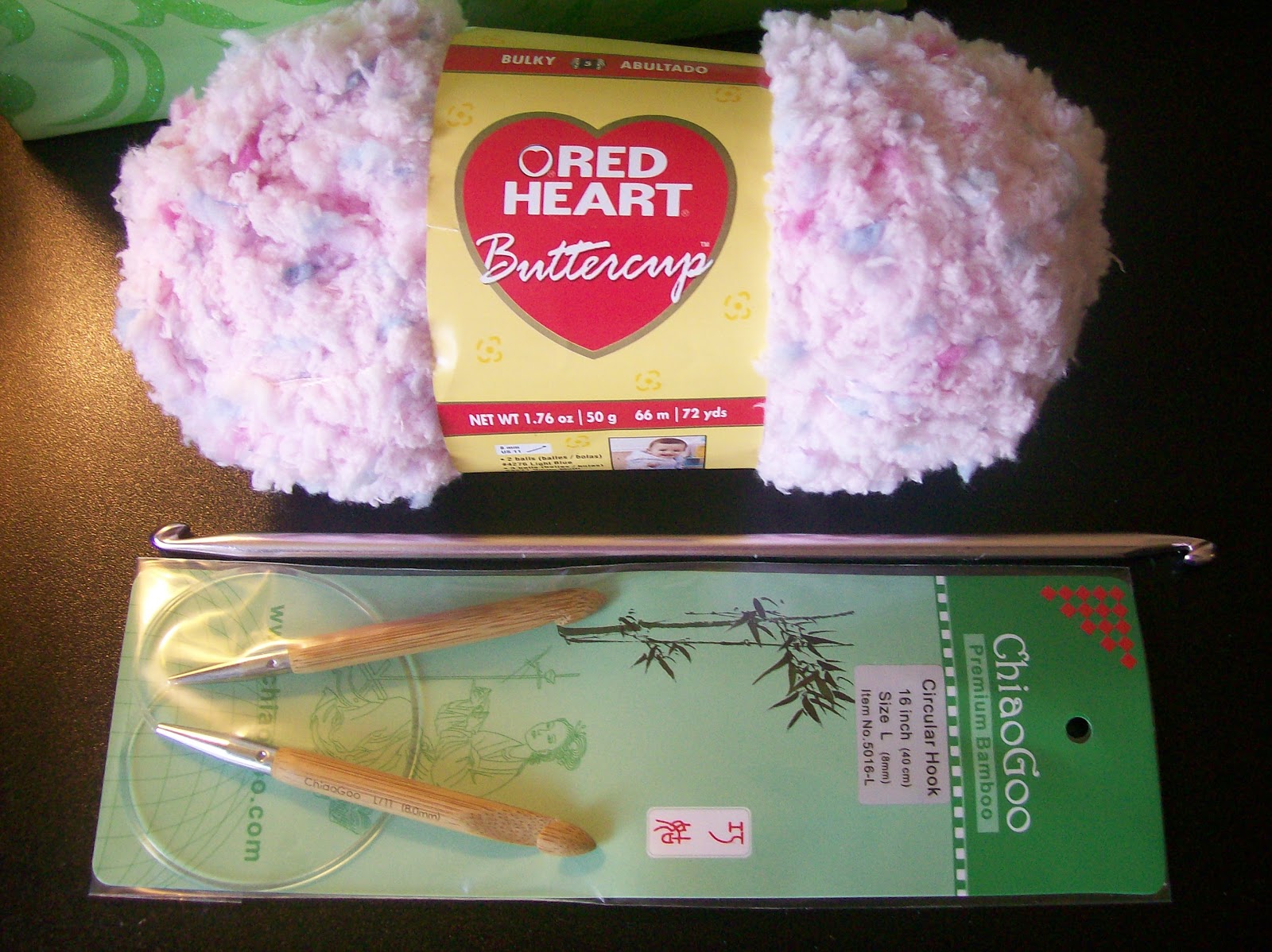 Well, I’m back for Part 2 of The Knit and Crochet Show posts on my blog.  I took 4 classes, not including professional development day.  My first class was double-ended tunisian with Darla Fanton.  I’ve seen this technique in magazines, but never tried it until last week.  I may take some pics of my swatches to show you later.

I was surprised to get some unexpected goodies in my classes.  I got a double ended aluminum hook that I think was donated by the Susan Bates company.  We also each got a double-ended tunisian cable hook from ChiaoGoo.  We also got a skein of this yarn from Red Heart called Buttercup that is deliciously soft.  Thanks to those great companies for the goodies! 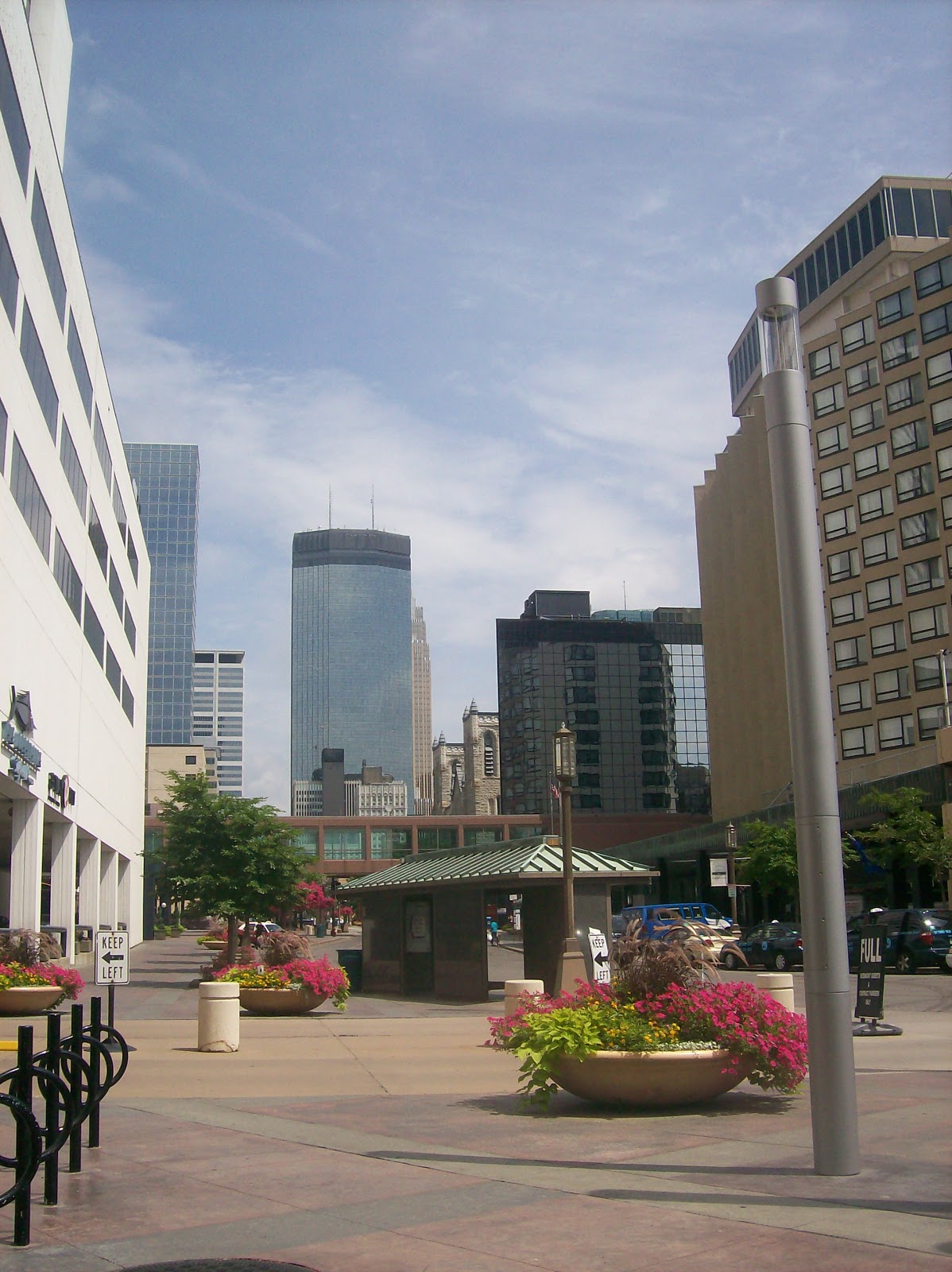 This is a picture taken out in front of the host hotel, the Hyatt Regency in downtown Minneapolis.  I was very impressed with the area.  You can see the two large planters overflowing with magenta petunias and some sort of bright green-leafed plant.  There were some beautiful fountains along this road, a farmer’s market and an open-air mall.  There were these bike racks in various places that had rentable bikes parked at them.  Very cool! 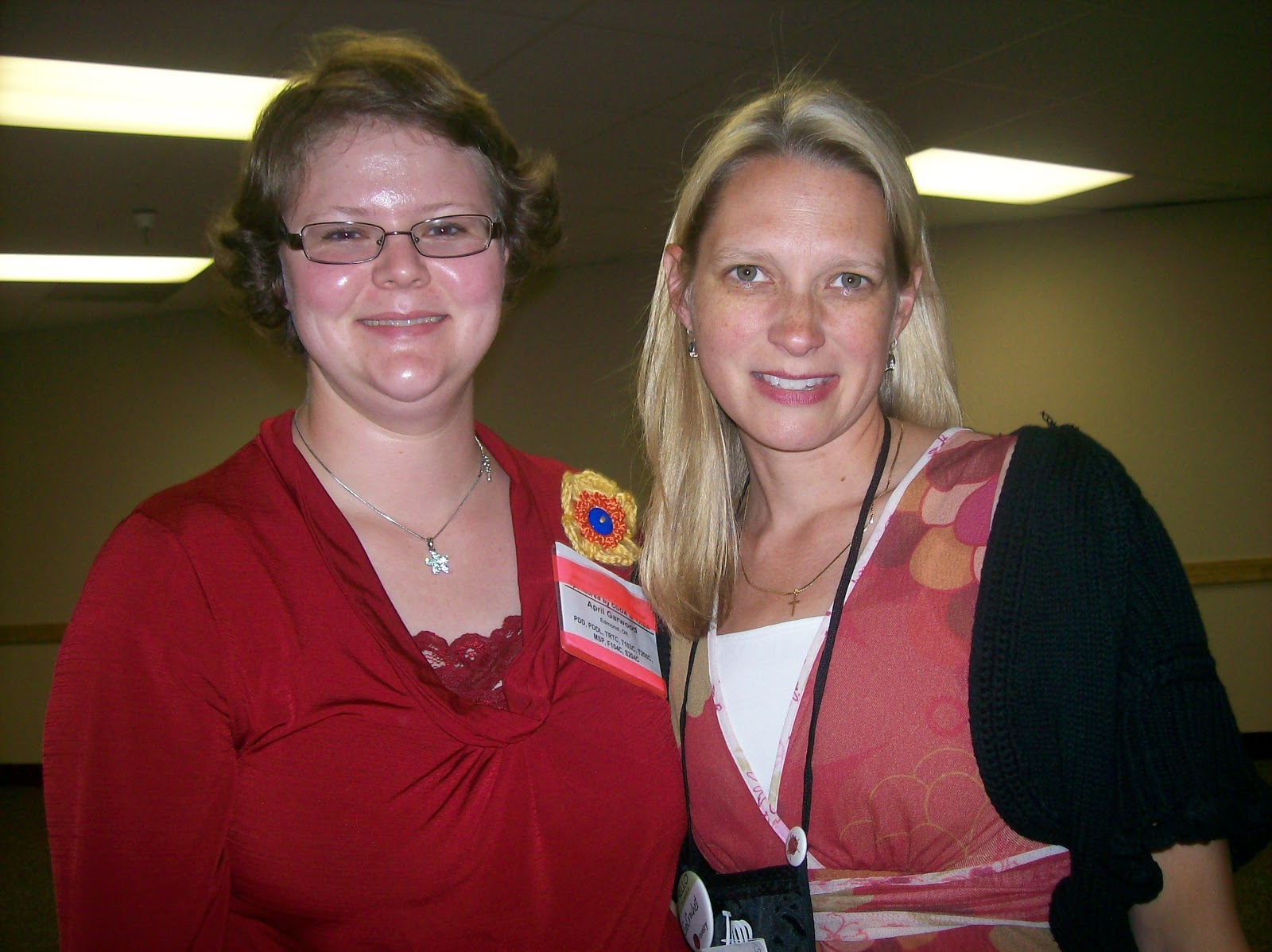 This is Ellen Gormley of GoCrochet and I during a tunisian entrelac class on Saturday.  I had been pretty nervous all week about the meet and greet with the editors that took place Saturday morning, and that was already over when this picture was taken.  So by this point I was feeling pretty relieved.  Ellen had just finished a book-signing down at the market.  We sat next to each other during this class and enjoyed visiting.  I just felted my entrelac bowl today.  I’ll get a picture when it’s dry to show you.  It turned out great!  Ellen was very nice.  I’ve followed her blog for over two years, so it was really a highlight for me to get to meet her in person. 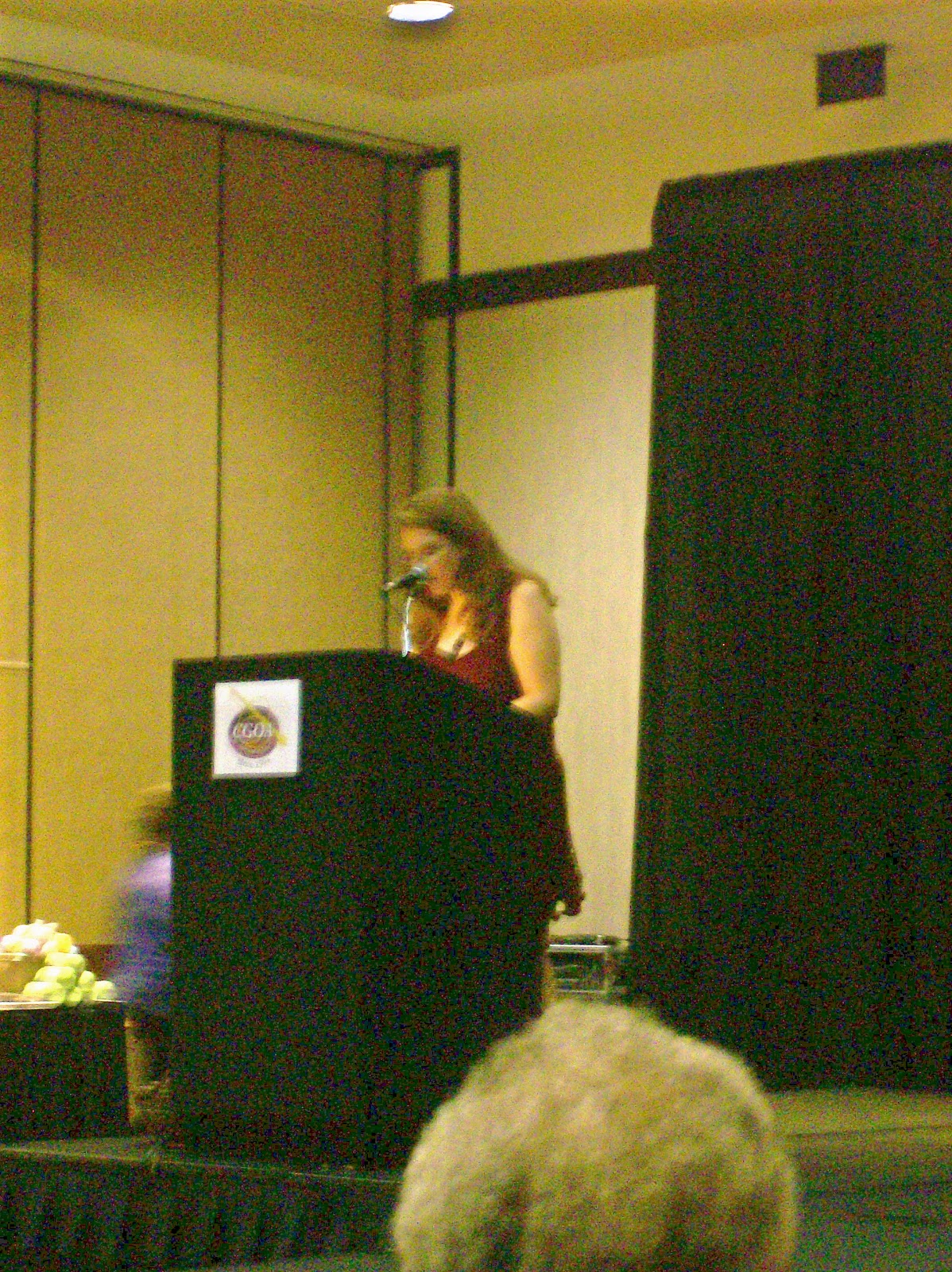 This is CGOA president Amy Shelton, also the owner of Chrochetville, during the dinner and fashion show on Saturday night.  That was a lot of fun!  The food was good and the fashion show was lots of fun.  I also met Amy and she was also very nice.  I could imagine that she had a lot on her plate during the conference, but she still seemed pretty relaxed. 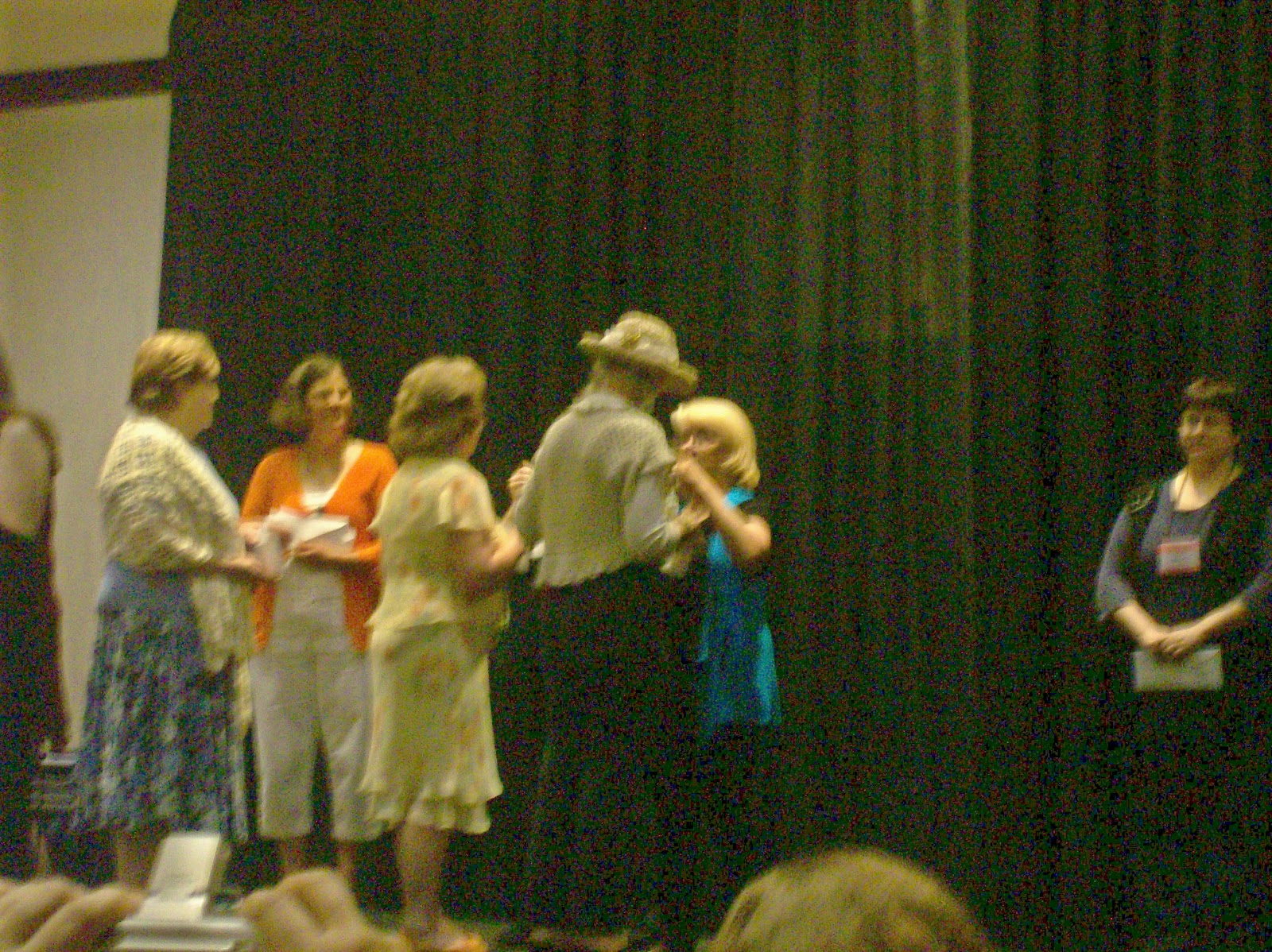 Several CGOA members participated in the Master’s program that was started by the CGOA and “graduated” during the dinner.  One of them was my “buddy” Mary Nolfi.  Congratulations to Mary and all the other graduates!  Way to go! 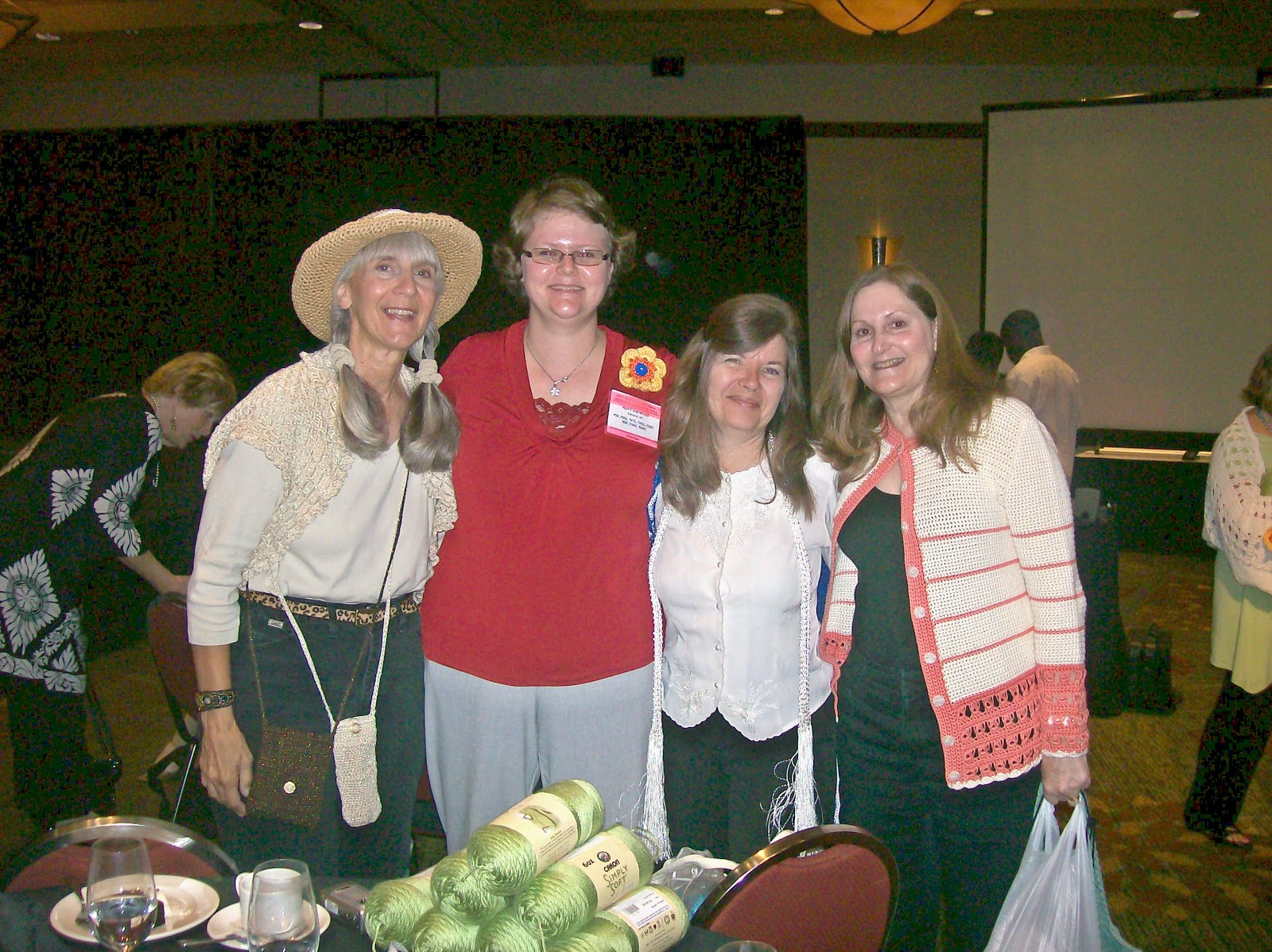 From left to right this is my “buddy” Mary Nolfi, me, Mary’s other newbie, Christine Donnely, and my roommate Patsy Harbor.  If you subscribe to Crochet! magazine, you may notice that Patsy’s cardigan looks familiar.  She designed it for Crochet! magazine and it was offered as a web bonus with the March 2011 issue.  It is called Broomstick Lace Cardigan.  Patsy and I really hit it off!  We didn’t meet until the conference, but we spent the first night staying up way too late talking.  We have become great friends!  We sure had a great time together this week!

In front of us on the table you may notice a pile of green yarn.  I got lucky at the dinner as well as PDD and won 7 skeins of Caron Simply Soft in pistachio.  There was also a free skein of yarn and spool of thread on the table for each person that attended the dinner.  I got a LOT of yarn during the conference! 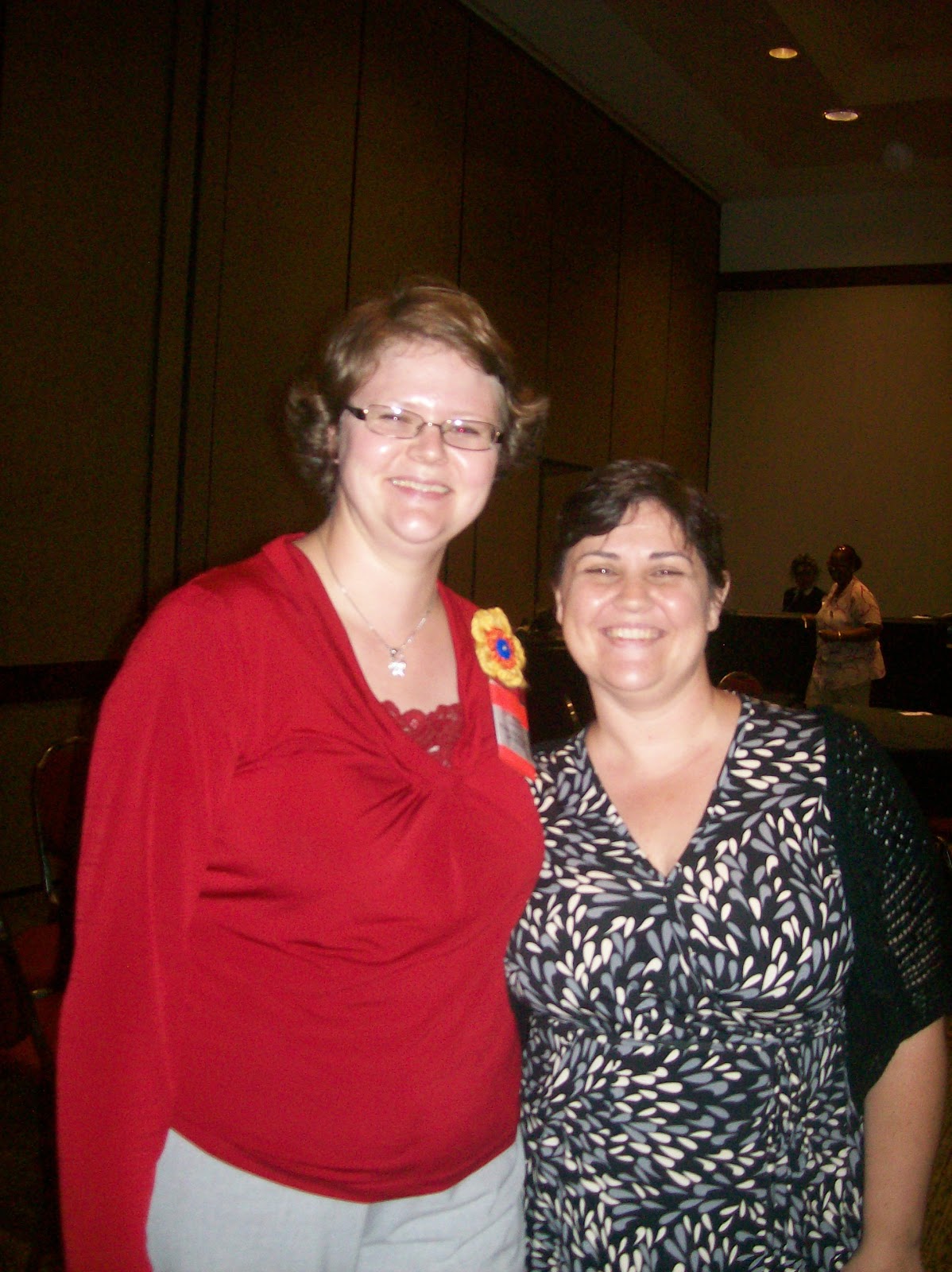 This is Kate Steinke and I after the dinner.  She is also a designer whose first published design was in the most recent issue of Crochet! magazine.  It is called Victorian Ornaments afghan.  It is really beautiful!  Kate is very nice, fun, determined, and a go-getter.  I really like her.  You’ll be seeing more of her work in the future! 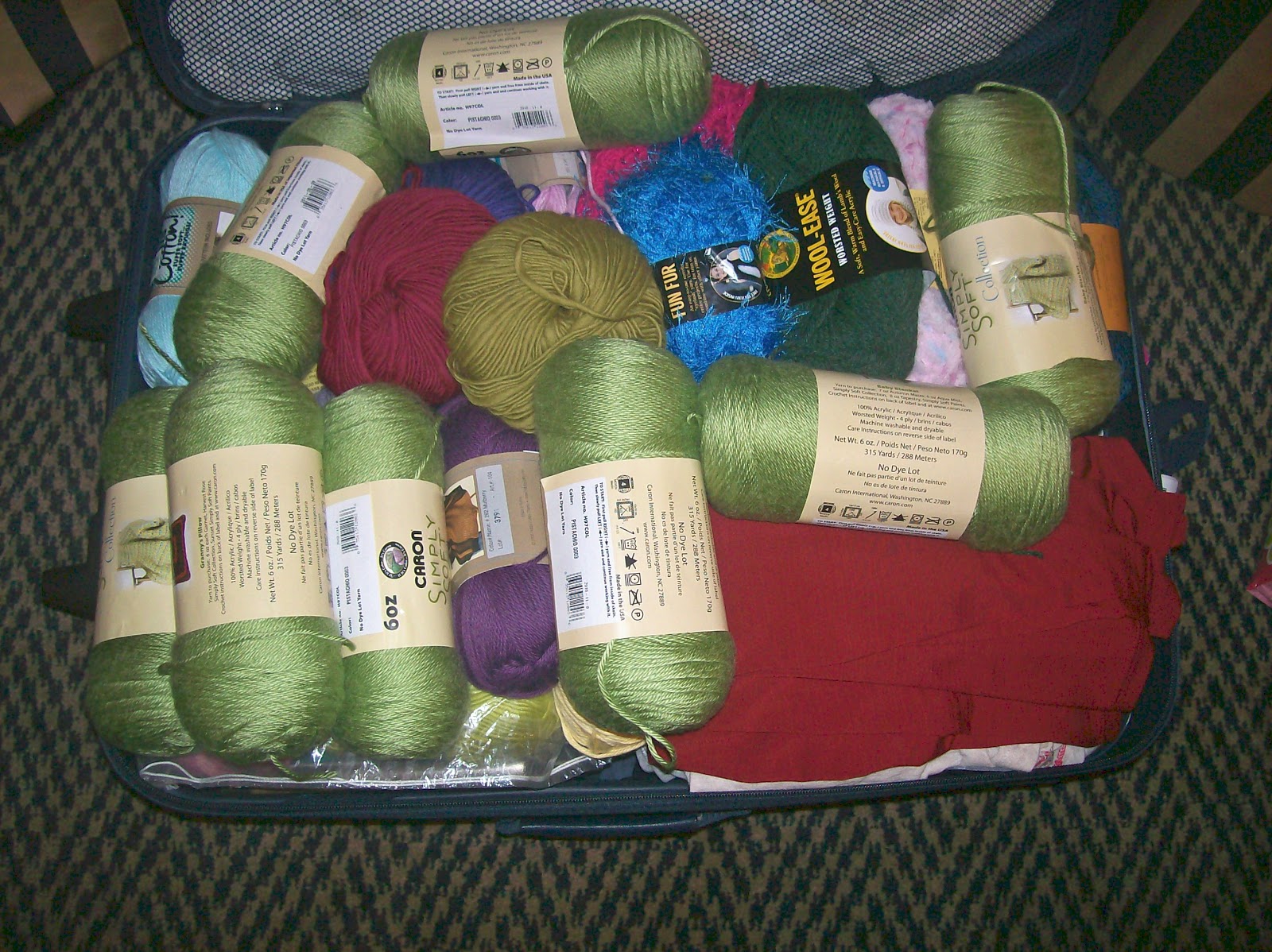 After the dinner on Saturday night I began packing my suitcase.  This was very challenging because I had gotten so much yarn during the conference.  I brought some with me to use in my classes, got 3 free skeins on PDD, got yarn in both of my classes on Thursday, including 7 skeins in one class, bought 3 hanks of yarn at the market, was given the yarn and thread on the table during the dinner and then won 7 skeins as a door prize.  I managed to get my suitcase shut, but barely.  I was really worried that the zipper would warp before I made it home.  I look forward to putting it all to use.

I’ll have a few more pictures, and that giveaway I mentioned, later this week.  Have a great day everyone!